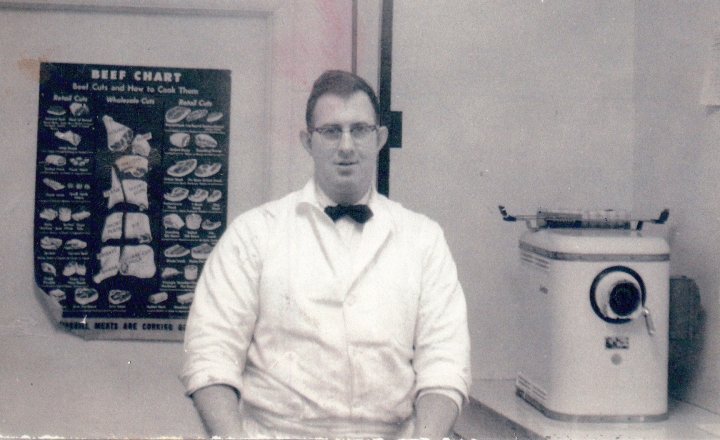 Phil Lowery: I'm not sure what reminded me of my pay when working at Roelke's Market. We would get paid with cash every Saturday in an envelope. The minimum wage in early 70's was $1.60 per hour. The outside of the envelop would have handwritten our name and on the left side list of the deductions for taxes, etc.

Daryl Snoots worked in produce. After Daryl passed my mother started working there and she worked in produce, monitored frozen food, and placed orders for frozen food when supply was low. After Billie retired Mr. Roelke didn't replace him. Mr. Roelke was the meat cutter. It was strange for me the first time I went inside the large walk in meat fridge to see a half cow or pig hanging off a meat hook. March 13, 2010

Phil Lowery: I remember Billie Carter and Mr. Roelke smoking a pipe while cutting meat. It's funny in today's times the health department would not allow smoking. People in came in the store smoking and not all people wore shirts or shoes. Dec 13, 2012

Peter: Daryl Snoots also worked for my grandfather at the City Meat Mkt. He drove the delivery truck with my father often in tow.. March 13, 2010

Kathy Carter Escamilla: Actually I called Aunt Peg before posting this to find out what year dad began work. Aunt Peg said that dad took the place of someone named "Beaty" or something like that.