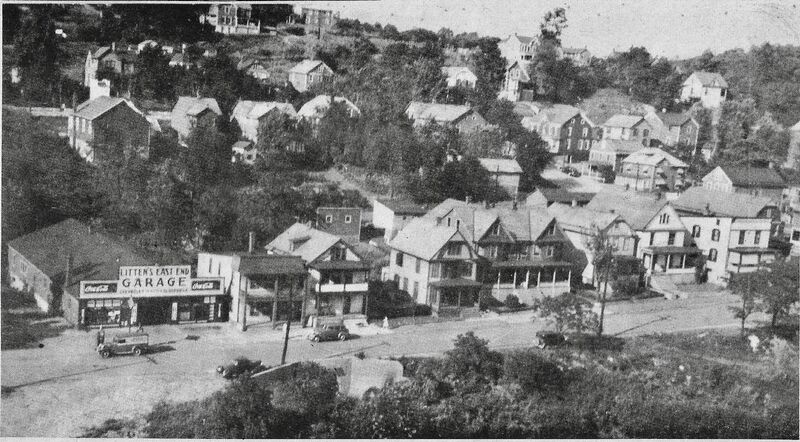 This photo was in a clipping from the Blade-Times on May 18, 1967. We believe the caption was wrong, as it said the photo dated to 1920, and as John Roby Morsberger points out below, the cars date to at least the mid-'30s.

In any case, the rest of the caption is this:

"H.R. Moler climbed the long-gone water tower adjoining the B&O shops and made this view of East Potomac Street. The (former) Moose Club is now located where Litten's Garage is seen at left."

According to Jim Dixon: "In about 1947/48 the Moose built a new building and the lumber from tha old building (Litten's garage) was donated to the Fire Company and used on the roof and sub flooring of the new fire company."

According to Jackie Ebersole: "You can see the Christian Missionary Alliance Church behind the garage on A Street. The round topped house was the Painter/Moler house and the large one at the end was owned by Mrs Lulu McMurray and had a lot of apartments. The white garage facing north behind the last 2 houses was rented by Mr. & Mrs. Grayson Strailman. Monk and Pat Haller grew up in one of those 2 last houses on the right."