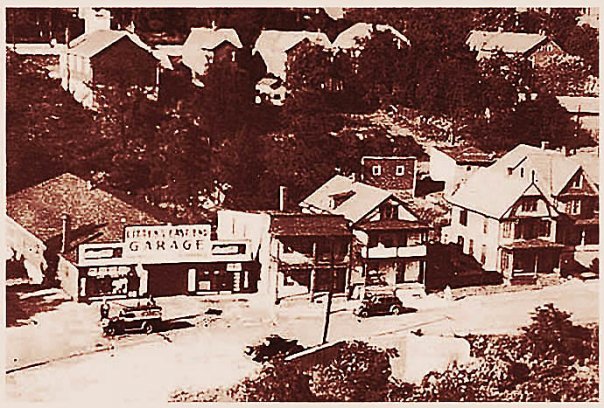 Litten's East End Garage located where the Moose now is. There were 2 Litten's dealerships in town at the time. The Litten's were known as the place to buy Chevrolets and later Oldsmobile and other GM brands.

Bobby George: I really enjoyed this picture. Russel Litton was my great uncle. I have many fond memories of him and Aunt Catherine. I remember visiting him at the west end of town at the dealership.

Jim Dixon: In about 1947/48 the Moose built a new building and the lumber from that old building (Litten's garage) was donated to the Fire Company and used on the roof and sub flooding of the new fire company. Russel Litton was born near Edinburg Va. at the Union Forge Church there are some of the Litton family buried. From what I can remember my Grandfather Milton Holler was friends as a child and also worked as a salesman PT for Russell. Russell told me Milton at one time took in a horse and buggy on trade for a new car, Mr. Litton got a big laugh out of that.

Jacquelyn Ebersole: You can see the Christian Missionary Alliance Church behind the garage on A Street. The round topped house was the Painter/Moler house and the large on at end was owned by Mrs Lulu McMurray and had a lot of apartments. The white garage facing north behind the last 2 houses was rented by Mr. & Mrs. Grayson Strailman. They had no way to have a garage at the corner of A & 5th. Monk and Pat Haller grew up in one of those 2 last houses on the right.