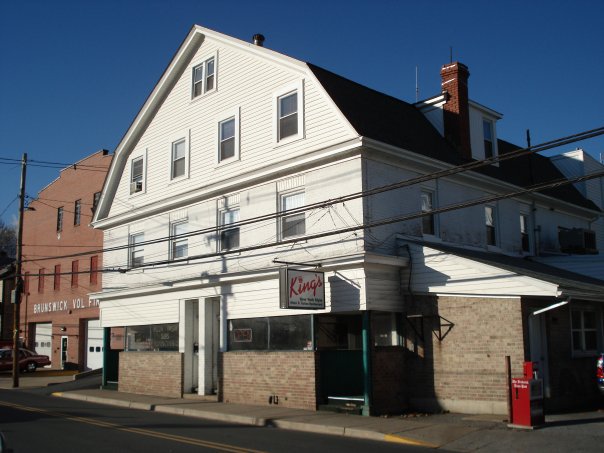 King's Pizza today, but known to old timers as the Mace Building. One-time Brunswick mayor Harry Mace owned the building and ran a store here that sold furniture and dry goods until his death in 1954.

In the middle 1950s, Judge Wenner's father Bill sold TVs and appliances here before his widow Eleanor moved the City Meat Market across the street after the store burned in 1959. After the City Meat Market closed in the early '60s, Al Cavall operated the Maryland & Virginia General Store at this location.

The building was vacant for many years until Stump and Ginny Brightwell opened the Berlin Cafe in the 1970s. As we're not sure when the Berlin closed and King's moved in, we'd appreciate further information to fill in the gaps.

Kara Hubble: I remember the Berlin. My uncle Chuck took me there often, wasn't a thing to have a kid in the bar back then. I was born in 83 so if I have memory of it then King's had moved there in the early 90's because I also remember King's being in the old building which they turned into a "teen center" for a minute.