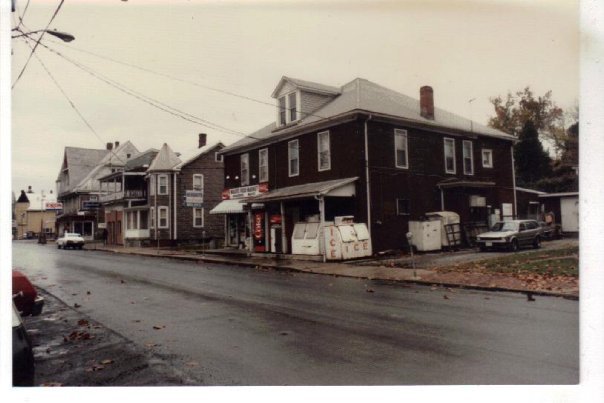 Going from right to left after Moler's at the time of photograph is the Twigg residence, the laundromat (originally the Whistle Stop restaurant; later Grace Baptist Church & School and now Enviro-Tech). Cage's Garage is across the street. Cage's was destroyed by fire in the 1980s and remains a vacant lot except for the apartments that were attached to the back of the building.

Tan building at far left was once owned by Herb Daugherty and was one of the locations of Frank Wenner's barbershops. We're not certain of what was there before that, but there were a number of businesses across from the Y, including Beatty's Meats in the 1920s and '30s, Foster's Weenie Joint in the '30s and '40s, Harrington's Shoe Shop and the pool hall (both in the old Werntz location) in the 1970s.

Kathy Moser Stowers: my mom Shirley Musser Moser used to live in that same house where the ice container is. the store used to be a tin smith shop long ago about the time of w w 11. she left when Jim Ridgeway owned the store. she is daughter of the late Bessie Howard and gr daughter of Martha cannon Lowery.

Deb Campbell: I have such fond memories of Moler's Market. Walking there each day after school for a treat! My kids have those same memories!

Dixie Kagey Teagle: I remember we would walk to Molers market on Sunday mornings to get donuts brought in from the Frederick Donuts Shoppe!