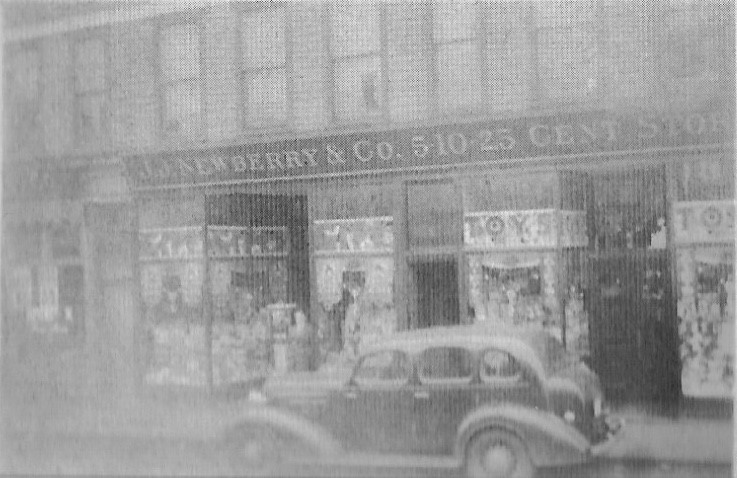 This photo of the old "Dime Store" likely dates to the 1930s. Newberry stores were sold to the McCrory chain in the late 1960s, but continued the Newberry brand until the time the Brunswick store closed around 1990. The store was managed in the 1960s-'70s by Jeff Cauley.

The John J. Newberry & Co. on West Potomac Street with its 3-door entrance was a thriving "Five & Dime Store" for generations dating back as early 1919. It started in town across the street in the old Harman building, later owned by the Cincotta family. The business moved to this location around 1930.

According to Helen Cooper, who worked at the store for years and became manager, before this storefront became Newberry's, it was home to 3 different businesses. On the left side was "the old opera house, which was later made into a miniature golf course. The center room was the Lace Store, which eventually moved down to East Potomac Street. The last store room, next to the Potomac Foundation Building (now the museum) was owned and operated by a Mr. Eugene Cost."

Tamara Walker My Aunt Helen Cooper was manager there and she'd tell me how every Saturday night after closing they would mop kerosene onto the floors. Loved those old creeky floors, loved her more

John D. Hahn: My mom Blanche Frye worked there in the 1940s before she met my Dad Ham Hahn. She always spoke fondly of her time at Newberry's.

Mark Stewart: According to my Dad and Grandfather. There was an indoor miniature golf course upstairs in the 30s. When your golf ball went in the last hole it went down a chute to the dime store below.